Read the statement in Arabic here.

The Women International League for Peace and Freedom welcomes the Commission of Inquiry’s report on the rampant human rights violations in Syria, and recognises the challenges the Commission withstood as it continues to be denied access by the Syrian government. However, we deeply regret that crimes committed by the Assad regime against women and girls were not addressed in the Commission’s reports.

There is no doubt that all parties to the conflict in Syria have committed grave violations against women. Since the outbreak of the Syrian revolution exactly five years ago, the Syrian regime was responsible for 91% of women and girls’ deaths, and has arbitrarily detained fourteen times more women than Daesh, and nine times more than armed opposition groups[1]. The number of women who died as a result of torture by the Syrian regime is double that of Daesh victims[2], yet perpetrators continue to enjoy full impunity nationally and the international community failed to set the ground for any form of accountability.

Conditions inside regime-run prisons and detention facilities for women are alarmingly appalling. One former detainee, who was pregnant, reported being kicked, electrocuted, and sexually harassed. After her release, she gave birth to a deformed baby boy[3]. The impact of detention on women is not only constrained to when they are incarcerated. Upon their release, women detainees face distinct difficulties in resuming their daily lives. In a society where patriarchal norms are deeply entrenched, Syrian former female detainees are often shunned by their own communities and sometimes their families, and almost never receive adequate psychosocial support and legal redress.

We demand the international community to revise its approach towards combatting the total impunity for grave violations of women’s rights in Syria. We also call the Human Rights Council to move beyond condemnation and reporting, and take effective and sustainable measures to save the lives of tens of thousands of Syrian detainees, particularly women, who are being tortured as I read, and you listen to this statement.

[3] “Detention of Women in Syria: A Weapon of War and Terror” (2015), Euro-Mediterranean Human Rights Network 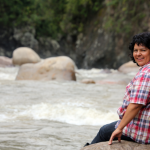